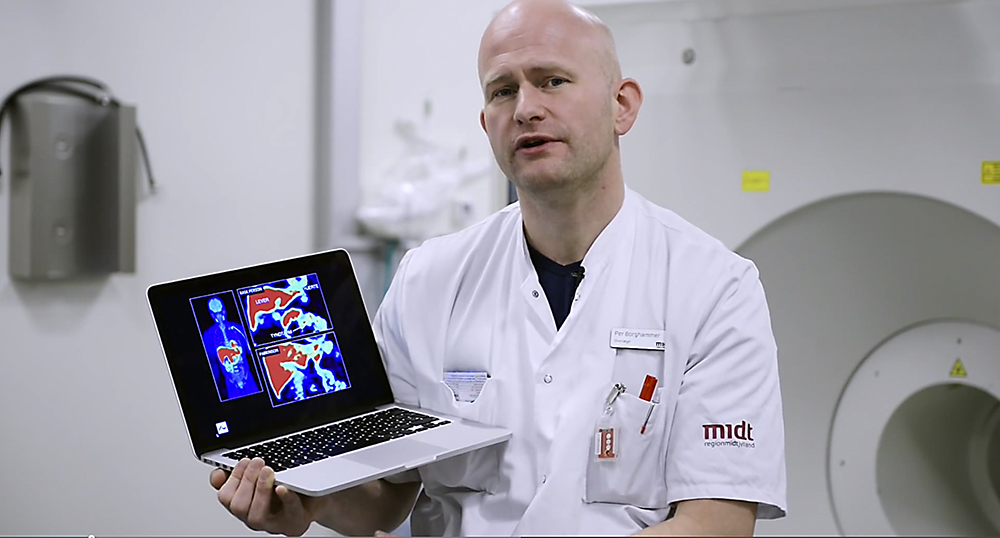 Consultant Per Borghammer is showing some scannings from his research project in Parkinson's disease (photo: Tonny Foghmar, Aarhus University Hospital).

Lundbeck Foundation grants DKK 10 million for a research project to investigate whether Parkinson’s disease starts in the gut many years before it affects the brain.

As early as ten to twenty years before patients are diagnosed with Parkinson’s disease, many have problems with digestion, for example constipation. This may be a very early sign that the nerve pathways that regulate gut function have been damaged. New research indicates that Parkinson’s disease may start in the gut and, from there, spread to the brain via the nerve fibres that connect the gut to the brain.

Per Borghammer, consultant at the Department of Nuclear Medicine and PET Centre at Aarhus University Hospital, has recently received a five-year fellowship of DKK 10 million from Lundbeck Foundation to test this hypothesis thoroughly.

“We’ve developed the world’s first method to take pictures of the nerve pathways which control, among other things, gut function. Consequently, we’re now able to see whether the nerve pathways were already damaged several years before patients develop symptoms of Parkinson’s disease,” says Per Borghammer.

The method uses a radioactive tracer which binds to a particular enzyme in the parasympathetic nervous system. This is the part of the nervous system that connects the body’s organs to the brain and spinal cord and is responsible for, among other things, stimulating digestion. The enzyme is found in healthy nerve tissue but is not present when the tissue has been damaged.

When Per Borghammer injects the tracer into patients, he uses a specific type of scan (PET) to take pictures of the nerve connections. If there is a strong signal, the nerves are healthy. However, a weak signal indicates that there is a loss of nerve connection.

“We’ve scanned over 30 Parkinson’s patients and the PET scans of almost all of them show the same ‘pale small intestine’ compared to healthy controls,” says the newly-appointed Lundbeck Foundation Fellow. “We expect to see indications of this nerve damage in the gut many years before the patient is diagnosed.”

The Lundbeck Foundation grant will ensure that he is able to concentrate on his project for the next five years. He will now use this scanning method to examine a larger number of patients who have not yet been diagnosed with Parkinson’s but who most likely will develop the disease. We know that the majority of patients with a particular REM sleep behaviour disorder (whereby patients, during REM sleep, behave like they do in their dreams) later develop Parkinson’s disease. By scanning these patients, Per Borghammer can investigate whether the hypothesis holds up; whether the earliest indications of Parkinson’s disease can be detected by scanning the gut.

If it is proven that the earliest signs of Parkinson’s disease can be seen in the gut, his method can be used to make a diagnosis much earlier than we can at present.

“Drugs have not yet been developed that can halt Parkinson’s disease, but it’s important that, as soon as a treatment comes on to the market, patients can be diagnosed as early as possible so that they can be treated before they develop serious symptoms,” stresses Per Borghammer.

Lundbeck Foundation has chosen to support Per Borghammer with a Fellowship, since his research project has great potential to provide a better understanding of Parkinson’s disease:

“Per Borghammer is a highly qualified clinical researcher with a well though-out project to test an elegant hypothesis. There’s a high probability that his research will generate fundamental new knowledge of Parkinson’s disease and that the project will pave the way for research into potential, new treatment methods,” says Anne-Marie Engel, director of research at Lundbeck Foundation.

About the Lundbeck Foundation Fellowship Programme

With its Fellowship Programme, Lundbeck Foundation aims to provide talented scientists with a unique opportunity to conduct concentrated and dedicated research for a period of five years. Each Fellow receives a research grant for DKK 10 million. Grants go to young scientists who have gained a PhD within the past five to seven years and are qualified to establish or develop their own research teams in biomedical sciences.

Parkinson’s disease is one of the most common neurological diseases. In Denmark, 7000 people suffer from the disease and it is estimated that seven to ten million people have Parkinson’s disease worldwide. The disease is chronic and gradually worsens as we lose from the brain increasing numbers of neurons that produce important neurotransmitters, including dopamine. Dopamine is a neurotransmitter that transfers messages from one neuron to another. A lack of dopamine is what causes the main physical symptoms such as shaking, muscular stiffness and slow, sluggish movement.