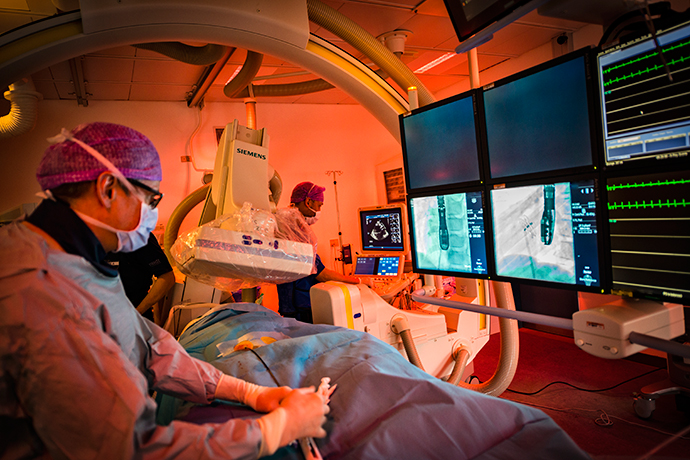 A specific type of scaffold used in balloon angioplasty is absorbable and in this way a possible future thrombosis in the scaffold can be avoided. If it is absorbed too fast renarrowing can occur, but this new type of scaffold seems to be able to maintain flow through the coronary artery long enough to reduce the risk of renarrowing.

In the 1990s a new type of stent, the drug-eluting stent, was introduced and reduced the risk of renarrowing; this type of stent was a ”game changer”. Advancements in the technology, the drug-eluting effect and especially the coating of the metal stent delivering the drug have improved results. With this new generation of drug-eluting metal stents, symptomatic re-narrowing is reduced to about 5%. The risk of thrombosis in the stent is also considerably reduced to about 1% after one year and subsequently approximately 0.2-0.4% annually. However, it is still a serious complication for patients with heart disease, who are expected to live many years after stent treatment.

The risk of developing arteriosclerosis again or thrombosis is especially caused by the metal or cracks in the metal because of metal fatigue. Moreover, a permanent stent reduces the possibility for performing new angioplasty treatment or bypass operations in the part of the artery that contains metal.

The long-term problems have caused researchers to create scaffolds that dissolve into particles after a few months when they have fulfilled their purpose. These absorbable scaffolds can presumably reduce the risk of thrombosis in the scaffold. The first pioneer work was made with magnesium scaffolds (PROGRESS and BIOSOLVE-1). These absorbable magnesium scaffolds were tested in patients but not used routinely, primarily because they were too weak and were absorbed too fast.

The next generation of absorbable scaffolds was made by new materials. Two of these new bioabsorbable drug-eluting scaffolds (ABSORB and DESOLVE) have shown promising results in selected patients with simple narrowings. However, there are also problems with these scaffolds as the strength is reduced compared to metal scaffolds and they break if they are widened too much during balloon treatment.

What if it was possible to develop absorbable scaffolds with metal properties lasting for the first six months?

Preliminary results from the BIOSOLVE-II study were presented at the international conference TCT 2015 inSan Francisco and published in The Lancet at the same time indicating that researchers are making progress.

The study is performed in 13 centres in Brasil, Europe and Singapore. Researchers from AarhusUniversityHospital in Denmark have seven patients included in the study.

From October 2013 until May 2015, 123 patients (average age 62.5 years, 63.4% males) with arteriosclerosis of the coronary arteries were treated with the DREAMS 2G scaffold (Bioronik AG), which delays the absorption of magnesium in the first critical months.

- After six months the part of the balloon-treated artery was less than 0.3 mm narrower, which is a much better result compared with studies of other absorbable scaffolds, says Evald Høj Christensen, MD and consultant.